You have permission to edit this article.
Edit
Home
News
Sports
Obituaries
Opinion
Things To Do
Classifieds
Legals
FAQ
Newsletter
Submit your news
e-Editions
Special Sections
Calendar
Contact Us
About Us
Advertise with Us
Corre la Voz
1 of 3

Verona freshman Emily Spielman swims her leg of the 200-yard freestyle relay. The Wildcats' 200 free relay took fifth place at the WIAA Division 1 Milton sectional on Saturday, Nov. 6, with a time of 1 minute, 50.99 seconds to qualify for state. 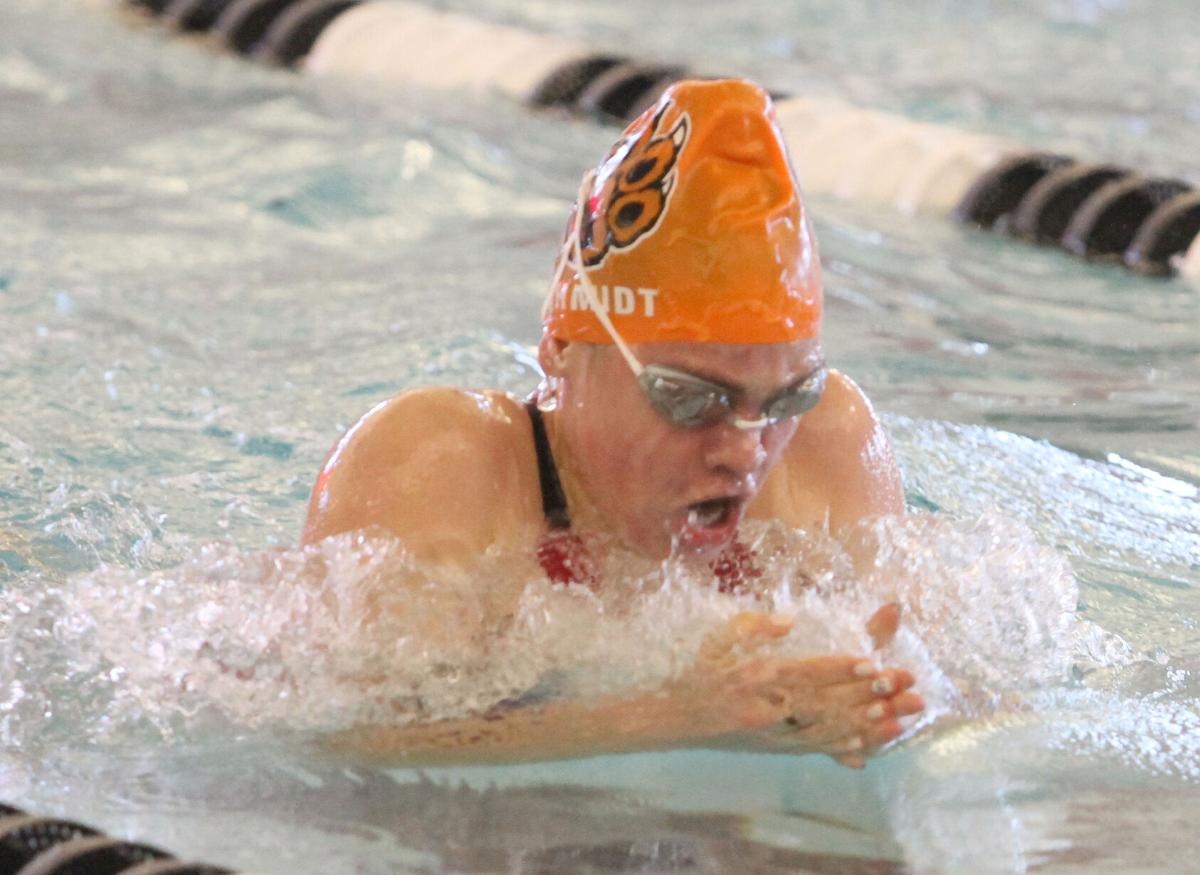 Verona freshman Emily Spielman swims her leg of the 200-yard freestyle relay. The Wildcats' 200 free relay took fifth place at the WIAA Division 1 Milton sectional on Saturday, Nov. 6, with a time of 1 minute, 50.99 seconds to qualify for state.

The four freshmen on the Verona Area/Mount Horeb girls swimming team may be too young to remember the Fab Five in Michigan in the 1991-92 season that captivated the college basketball world with five freshmen starters in the NCAA Championship game.

The Wildcats have a similar theme going on this season, as a freshmen quartet of WIAA Division 1 state qualifiers all share a passion for swimming and competing. Both freshmen Monica Schmidt and Emily Spielman say their best stroke is the 100-yard breaststroke. Yet, they are versatile swimmers who have helped VA/MH in several events throughout the season.

Schmidt qualified for state in the 200 individual medley. She also is a member of the Wildcats’ 200 medley relay team that is seeded 20th at state on Saturday, Nov. 13, at the Waukesha South Natatorium.

“Sometimes freshmen don’t swim their best at sectionals because the moment might be too big,” VA/MH coach Bill Wuerger said.

“They have done their best to push each other in practice to get better,” Wuerger said. “The freshmen class has given a lot of depth to our team and made us more competitive. I’m glad we will have them for three more years.”

It’s more of a friendly sibling rivalry among the freshmen in practices.

“We all have our specialities,” Spielman said. “We definitely don’t race against each other a lot. They are always there to cheer me on and it makes it even better. We just want to work together to get better.”

Each of the freshmen had to make an adjustment to swimming in high school with more frequent and intense practice sessions filled with longer yardage. With a new strength and conditioning coach at VAHS, weight lifting and bike riding became staples of workouts before the first official day of practice.

Schmidt said she had a rough transition to high school swimming with double practices three days a week starting at 5:45 a.m. every Monday, Wednesday and Friday and single practices on Tuesdays and Thursdays until they reached the taper time of the season a couple of weeks ago.

“The amount of practice time and the dedication takes a toll on your body,” she said. “It makes you a lot stronger swimmer which is good.”

Wuerger said the fact that VA/MH competed in some larger invitationals at the start of the season was a challenge and blessing for so many young swimmers to get adapted to the high school level.

Schmidt agreed with her coach’s assessment.

“It’s really intimidating swimming against the upperclassmen from other schools who are really talented swimmers,” she said.

Even before races, Schmidt made some changes to her routine. She had to learn that having a good mental strategy was helpful before races.

Schmidt will complete mental visualization at home or hours before a meet. She always stretches and adjusts her goggles and swim cap waiting behind the blocks before her race.

“I have had a lot of success and I’m proud of it,” Schmidt said. “I’m excited to see how the team does and I will do the best I can.”

Spielman was fortunate to lean on the advice of her middle sister, Allison Spielman, who swam for VA/MH and as a junior was on the Western Illinois swimming team before the program was cut.

“She always told me in the really hard part of the season to relax and she encouraged me,” Spielman said.